Do you know Chinese believe that 88 is a number for luck and fortune? In this pokies game of lucky 88 you too can try your luck for some wins. This pokies include the symbols on the reels, the music in the beginning, and even the fonts used in the game reflect the oriental style. It has great features such as multipliers, wilds, scatters and free games that improve your odds of winning by a good number.

In this 5-reel pokies with 25 paylines symbols reflect the Chinese culture, such as golden lions, cranes, a Chinese drum, a pagoda, traditional Chinese lamps, and high card values A, K, Q, J, 10 and 9. A Chinese man in his traditional attire acts as the wild symbol and can replace all other symbols, except the red lantern scatter symbol, on the reels to form a winning combination.

The game has a wild symbol and a scatter symbol. The red lantern is the scatter symbol, which if appears three or more times on the reels, triggers the free game bonus. The bonus can be free spins or a game of dice, whichever the player opts for. You can get up as many as 25 free spins in one go. The game allows the players to make a strategic choice, leaving it up to them to improve the odds for winning. Options you get during the free bonus round include

In Aristocrat’s Lucky 88 pokies almost all pays end with an ‘8’ from 8 to 88 with the exception of a few low end pays ending in 2 and 5. The graphics on the Lucky 88 pokies game are very well done and easy to follow. There are a couple of key pokie symbols to focus on: The Red Lantern and the Man.

Second important symbol in the Lucky 88 pokies game is the Red Lantern as 3 or more anywhere on the game screen will trigger the bonus feature. It can also pay very well as 5 on the game screen will pay 188x your total bet. Another thing that is unique with Aristocrat’s Lucky 88 pokies is that you can win a ‘Free Feature’ bonus. At the end of any spin, a message can come up that says “You are Lucky, Free Feature”. Again, this helps with excitement as you may have just spun up a losing \spin, only to get this message and enter into the Lucky 88 bonus feature. You can often see people cheer when they trigger the lucky bonus feature on this pokies game. 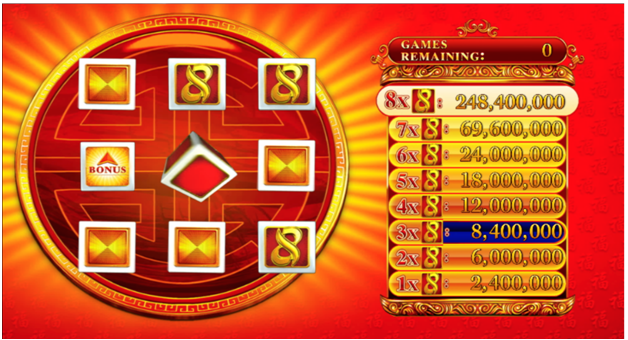 When playing the Lucky 88 without the Extra Choice 5 credit ante bet, the player has only a choice of free  games combined with wild multipliers when the bonus feature is triggered. The choices are:

But with the Extra Choice 5 credit ante bet enabled, the player has more choices for free games. 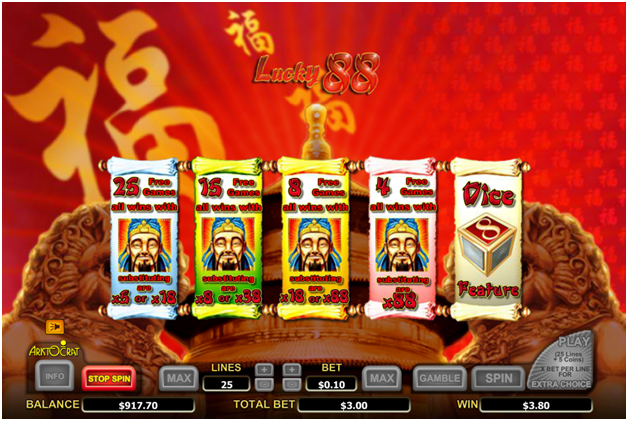 Q2. Are there any free spins in this pokies game?

The Red Lamp is the Scatter that can trigger the Free Spins bonus; the way this feature is played will depend on whether or not the Extra Choice is on. Once unlocked, the player will have the option to select Free Spins or roll the dice to win. At least 4 Free Spins can be won with a potential multiplier of x88 if a Wild icon completes the winning combination. The maximum number of spins is 25, with x5 or x25 potential multiplier.

Free Spins can also be triggered after every spin. In case the player is not using Extra Choice feature, the number of spins can start at 3 (with x18 or x88 multiplier) and reach 20 bonus rounds with an x5 or x18 potential winning increase.

Q3. What you get in the dice feature?

When the Dice Feature is activated, a player will initially get 3 games and the dice rolls are continued for as long as number 8 lands. Once the feature is complete, the player will receive a monetary award which depends on the number of 8s that landed during the rolling.

Q4. Where can you play Lucky 88 pokies for free?

Q5. Where can you play Lucky 88 pokies for real money?

You can play Lucky 88 pokies for real money at land casinos near you.

Queen of the Nile II