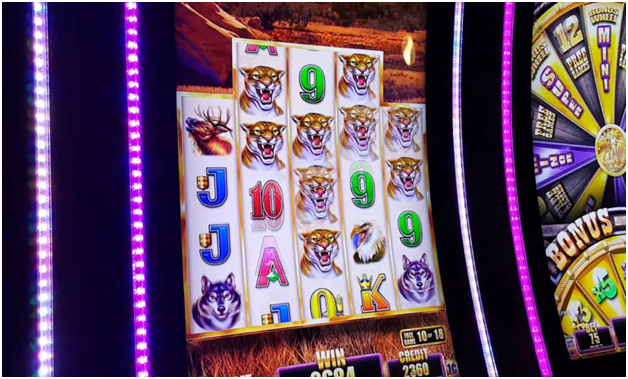 Aristocrat pokies are all free to play and can be easily accessed even with your mobile right at your home or any place of your choice. There are many awesome free apps at app stores that offer free Aristocrat pokies. These apps have been developed by Product Madness in collaboration with Aristocrat gaming company and offers wonderful free pokies to play. Here are the five top Aristocrat Pokies to play now all free.

1. Tarzan Lord of the Jungle 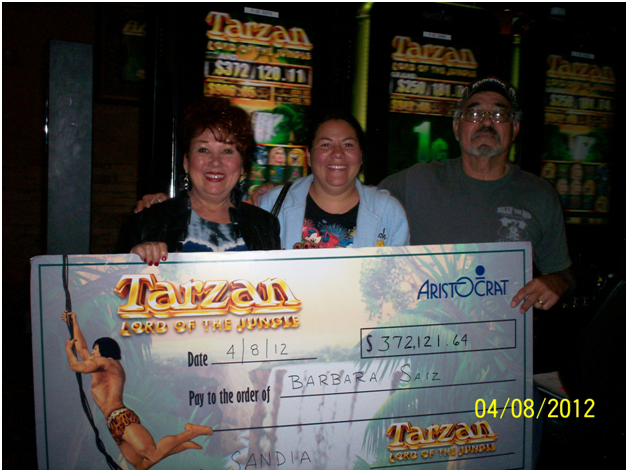 Tarzan Lord of the Jungle pokies from Aristocrat is one of the top Aristocrat pokies to  play free. The 3×5 game matrix of Tarzan: Lord of the Jungle has been set against a picturesque view of the jungle, which showcases a fast-flowing waterfall and dense vegetation. Above the reels, you’ll see four progressive jackpot counters – Mini, Minor, Major and the life-changing Grand Jackpot – which increase in value with every spin. The jungle setting is reinforced by the rhythmical beats of bongo drums echoing out from the cabinet’s surround sound system during every spin.

You’ll be hoping to scoop one of the four progressive jackpots from your very first spin of the wheel, but you won’t want to trigger free games until the wheel has spun a few times. Free games segments on your first spin offer 6 or 12 free games. Compare this to the 15 or 30 free games segments offered on the fourth level of the feature, and it becomes clear why so many players don’t mind waiting a few spins before getting the chance to play for free. 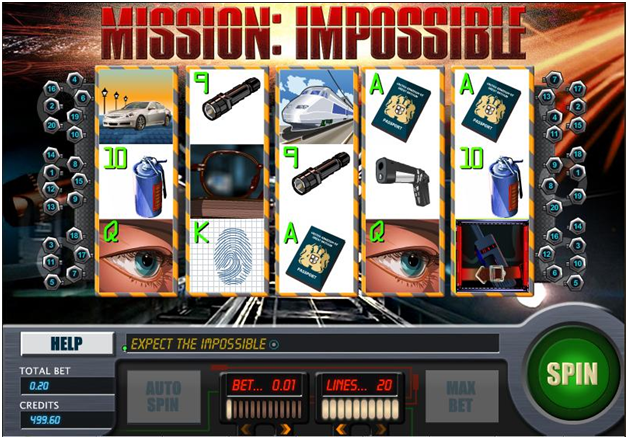 Mission Impossible Pokies is another free pokies to play which has an awesome random wilds feature. Also a mysterious hand appears and pulls off the screen as if it were a mask. The result is that all ‘face’ icons i.e picots of peoples faces are transformed into wild icons in a way that is stunning to watch. Another cool feature is the random wilds where you see a cross-hair from a rifle appear and begin to shoot icons that then become wild symbols. With a huge elongated screen that is common to many of the new big brand games coming out from aristocrat, the bonus games are spectacular in the way they immerse you as a player. The sounds and graphics are top notch in mission impossible slots, with an array of bonus game that will keep you amused for a long time as you find your way through the game, discovering them one by one. 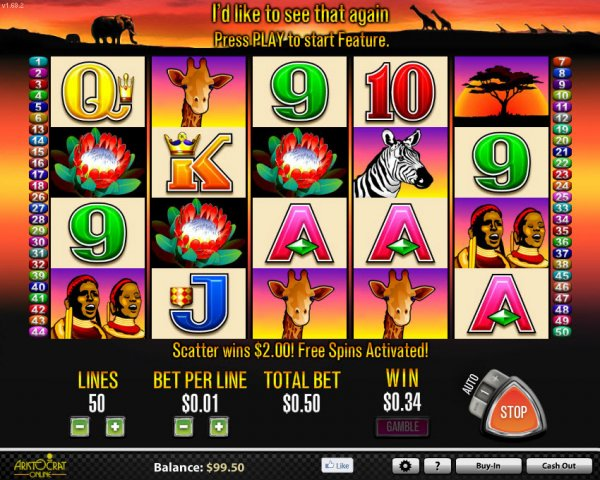 Also win 10 free spins in the free spins bonus round. As well as multiple Stacked Wilds, 50 Lions pokies has a bonus round which is triggered when you get the flower Scatter symbols on reels 1, 2 and 3. This releases 10 free spins, which are not multiplied. You can re-trigger the bonus by hitting the same scatter symbols on reels 1, 2 and 3 again, this will give you an extra 5 free spins. There are also some extra Wilds in the bonus round, which can increase your wins. If you have the patience to wait that little bit longer for the big prizes then this is worth the play. 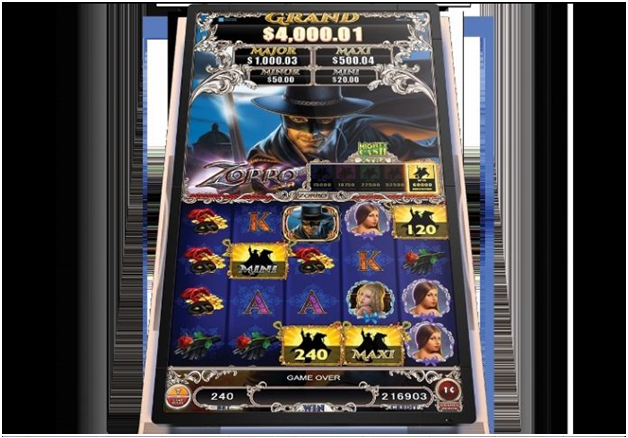 This Aristocrat’s Zorro pokie is based on the suave swashbuckler who has been featured in countless movies, television shows and books. Zorro’s history dates back to 1919, when he was created by Johnston McCulley. His first appearance was in The Curse of Capistrano, and he went on to star in a number of hugely popular novels and films. The most popular version of Zorro is played by Antonio Banderas in the Mask of Zorro and Legend of Zorro films.

When you play Zorro pokies machine, you will also enjoy exciting bonus rounds. Zorro, the secret name of Don Diego de la Vega is the master and nobleman character that has always been showed as a masked black-clad outlaw who defends ordinary people from different villains. You can play this pokies to win the coin jackpot of 5,000 coins or the maximum cash prize of $25,000. 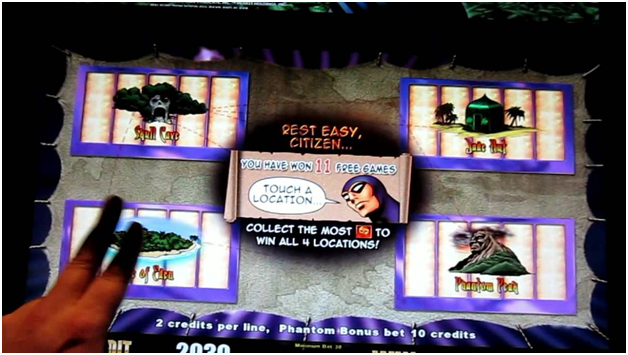 The Phantom pokies game is based on the popular comic strip character originally developed in the 1930s. It has all the features slot players have come to expect from Aristocrat. The game has a side wager which is called a “bonus bet” that’s required if you want to get the biggest payouts, its bonus round system is a complicated but beautifully-designed, and the theme of the game is consistent throughout all the machine’s features. Since Aristocrat began releasing a long line of licensed-character slot machines, The Phantom may be one of their strangest choices to base a pokies game on.

The Phantom had over 100 million fans that would skip right to the comics section of the newspaper to find out about his latest adventures. The character himself is a warrior in the fictional country of Bangalia. His trademark purple body suit and the skull symbol that often represents the character are ever-present in the game’s animations and on its case. But Phantom’s popularity is not what it once was; a planned film reboot is all but dead, a hint that today’s movie fans aren’t interested in this
particular classic comic character.

The game isn’t lacking in features, the quality of the visuals and sound effects are on par with other slots, and the bonus round will draw in plenty of slot gamblers who may not even know the origin of the
character. Though The Phantom is still in publication, and is one of the last remaining action adventure comics from a golden era, it doesn’t have the star appeal that Jaws or Mission Impossible pokies.

Now enjoy these five top Aristocrat Pokies to play now all free either with various mobile apps that are available free at app stores like Heart of Vegas, Cashman casino and  others. 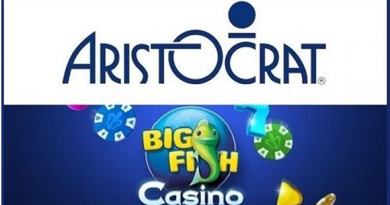 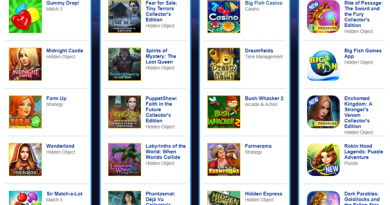 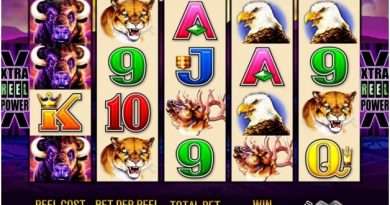 How To Play Aristocrat Buffalo Pokies?