Imperial House is definitely imperial. This pokies game from Aristocrat gaming uses Reel Power which means you have 243 ways to win this game. Imperial House pokies is played out on 5 reels. You can buy all the 5 reels with 30 credits bet.

With Asian theme Imperial House pokies symbols include waterfalls, pagodas, zodiac signs, and gold coins, among others. The highest payouts are given by the Emperor symbol, if encountered on all the five reels simultaneously. The wild symbol is represented by the coin icon, and appears from second to fifth reels.

The Palace symbol acts as the scatter in this game. Players are awarded with 8 free spins when encountering 3 of the scatter symbols on the reels. Different multiplier values are also attached with the free spins. Four scatter symbols also gives 8 free spins, while 5 such symbols give a payout that has a 25x multiplier. This scatter payout round is also called as the Drag-n-Drop feature. The bonus is played out on a different screen other than the basic scatter payout rounds. 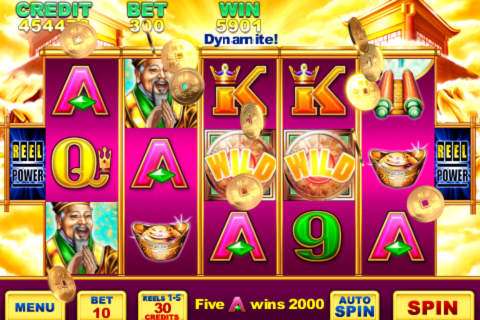 During the separate screen feature, you get to choose a coin symbol in one of the reels that you have already put wager on. This round excludes the first reel. The second to fifth reels have particular values of multiplier associated with them. You can expect a 2x multiplier if you choose the second reel; 3x multiplier on choosing the third reel; 2x, 3x, or 5x multiplier in case of the fourth reel; and 2x, 3x, 5x, 0r 10x multiplier on selecting the fifth reel.

When you have chosen the wild position, it strays wild for the remaining of the free spins. On triggering the bonus will feature, you are transported to another screen where you have to select a zodiac sign from the options give, which will reveal a multiplier number for your subsequent free spins. The free spin bonus can be re-triggered by landing with three or more scatters and can potentially award you with huge winnings at the end of the round.

You can play Imperial house both at online casino and land based casino. Also download the game apps from iTunes at $1.99 and play on your mobile and smartphone devices as well.